Sticky note on cover of Al Purdy’s: rooms for rent

Long bobbed hair  all in black   shirt sleeves rolled up

poets for you  autoerotic pencil flailing  in lonely parks +

15 yrs.  Don’t know how impressed he’d be with the ceremony

There was Sophie G.T. clutching her heart   blonde locks

flapping in the golden girl breeze

Al thought love: a comic disease  yet I kiss his cold cheek  + squirm on

she is half his age and far older  and how can a man tell his wife this? 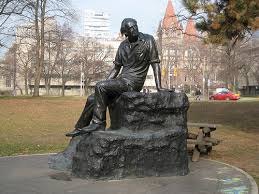