Why make it plain as day Mr. Curator?   Louis Jacob

/OUTSIDERS  A.G.O.  asks us: Do you recognize yourselves

in the monkey’s otherness?  He tells us: dividing lines

conjoin what they separate    A Jazz riff plays  somewhere

Gary Winograd the artist tells us: the monkey is the product of

miscegenation   The woman beside me says: a bit too long for

rape  aka misegenationdegredation  also too long for scrabble

This week the old white Jew who is running for President said:

into oblivion   He was instantly excoriated   And though his language

If a word grows up out of the dung heap of racism   why not keep it there?

Who is allowed to use the N word   Kyke   Ghetto?   Relics of a time when

schools were segregated  +washrooms at Toronto’s beaches had signs:

No dogs   Negros  or Jews

in every American city  where a disproportionate number of African Americans

live?   The Projects?   Whitewashing the truth   You cannot take the word Ghetto

out of the Ghetto   Why not call a spade a spade?   Who you saying lives in fear?

What you force me to be

Is what you are 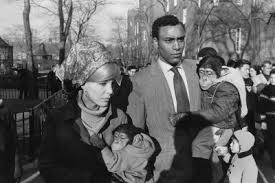 One thought on “GHETTO”